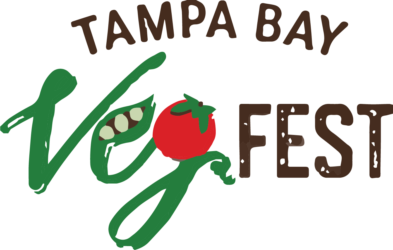 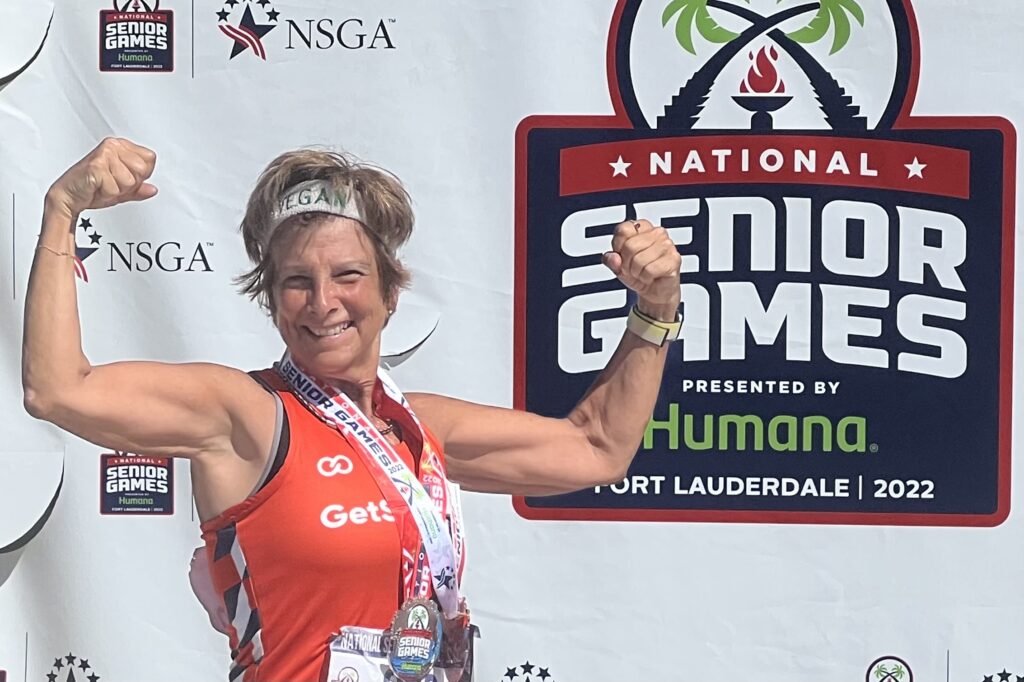 Ellen Jaffe Jones is an age-defying nationally ranked sprinter, certified personal trainer and certified running coach. The largest online free class platform for the 55+, Get Set Up, sponsored her at the National Senior Games where she was the only woman in her 70-75 age group to compete in all 7 track events. And placed in 3. Ellen is a 6 time vegan book author, including Eat Vegan on $4 a Day, and is a trained cooking instructor for Physicians Committee for Responsible Medicine. She has placed in an unheard of 257 5K or longer races for her age group since ’06. She’s been running vegan for 41 years and teaches aerobics at LA Fitness. 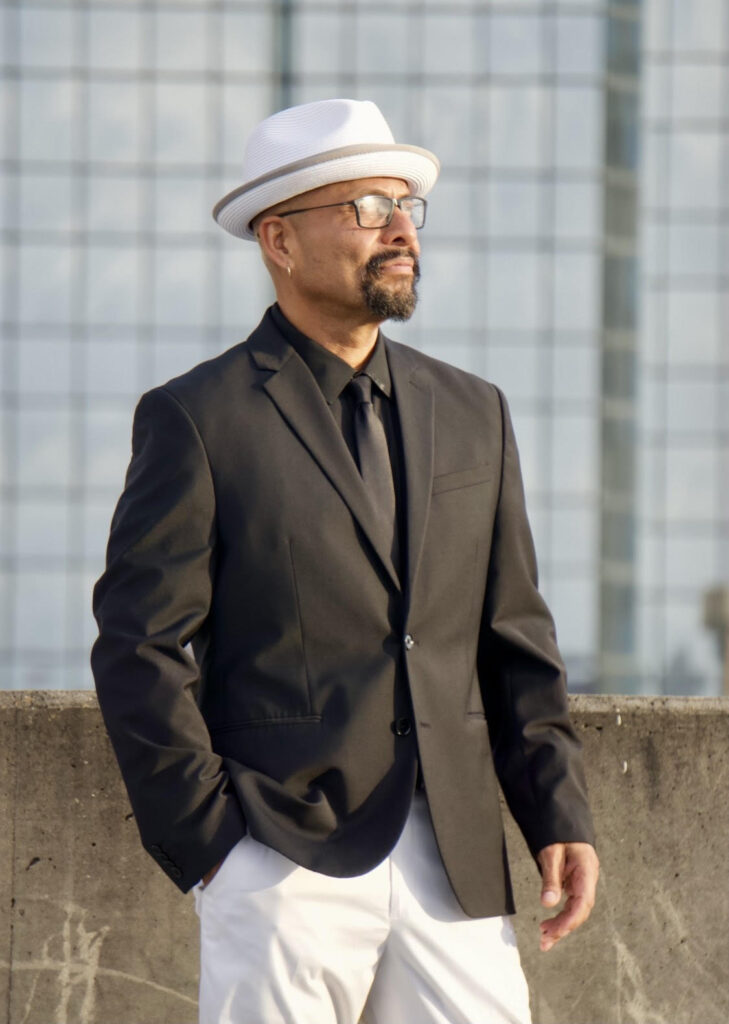 The Plant Based Health Influencer

I was raised in Queens, New York and grew up in a typical Latin household eating a lot of different types of meats, and toxic food.

By my late 20’s I had become accustomed to eating the Standard American Diet, which led me to eventually weigh 300 pounds if not maybe more.

I was diagnosed with type 2 diabetes in 2007 at the age of 44 and was sicker than I had ever been in my life.

At 50 years old in 2013 I decided to make a change and work actively towards healing myself from the inside out.

I decided to eat more Plant Based and ultimately became fully vegan in 2014. Coupled with a fitness routine, I reversed the diabetes type 2 and cured more illnesses, lost all the extra weight, and regained my health, confidence, and zest for life!

Now I weigh 165 pounds at 59 years young and I feel amazing! 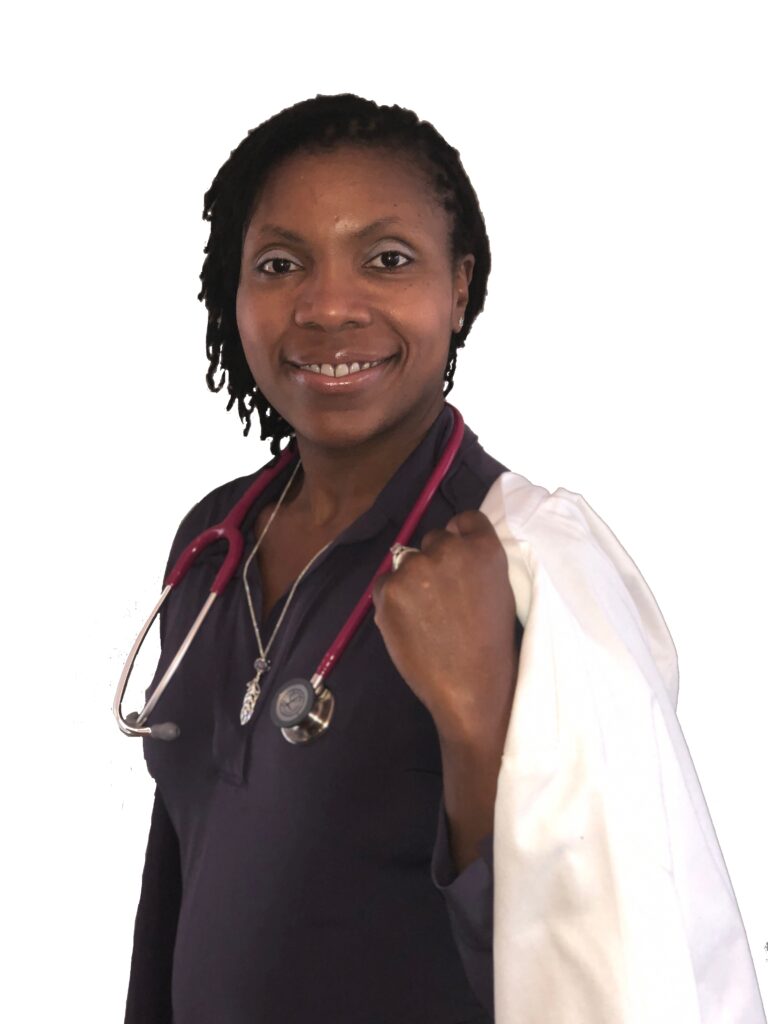 Having practiced a plant-based diet for numerous years, Dr. Shayla
Toombs-Withers has strived to incorporate her lifestyle into educating her patients in how to improve
and overcome their chronic diseases as a Family Physician. She founded Essence of Health Wellness
Clinic & Coaching in Chattanooga, TN in 2019 so that she could combine her deep knowledge of
medicine, plant-based nutrition, and athletic training to provide Preventative and Chronic Care to her
patients using a unique concierge model of care. Dr. Toombs-Withers earned a Doctorate Degree in
Osteopathic Medicine from the Edward Via Virginia College of Osteopathic Medicine and completed

Residency training in Family Medicine at The University of Cincinnati and Christ Hospital. She has also
completed additional Fellowship Training in Obesity Medicine and holds a Certificate of Plant Based
Nutrition. Her basis for health are in line with two of her favorite quotes “an ounce of prevention is
worth a pound of cure” and “let food be thy medicine.”

Bill Muir (AKA SGT Vegan) left a cushy life in Japan after 9/11 to join the Army. Despite being afraid of heights, he became a paratrooper, and served with the 173 rd Airborne Brigade in Afghanistan as a Combat Medic.

A vegan since 1992, Bill adhered to his PLANT-FUELED diet throughout his rigorous Army training and deployment. Bill now resides in Los Angeles, CA, and serves our Nation’s Heroes as a Registered Nurse. He has been interviewed on numerous TV shows all across America, and has appeared on NPR’s All Things Considered. Bill is the author of VEGAN STRONG, THE ADVENTURES OF SERGEANT PIGGY, and DEAD MEAT.

Animal Rights Panel: Come hear what some of our area activists do AND get a chance to ask them questions during the Q&A 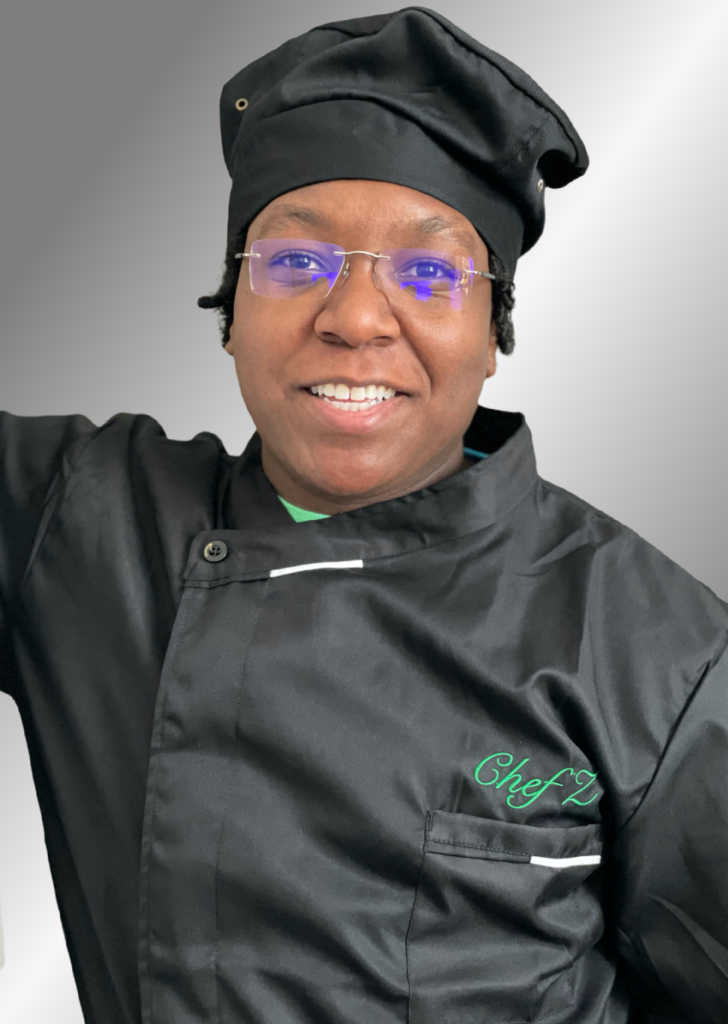 Zen 30, a Native of Washington D.C. whose palate was built on the many diverse cuisines and destination eateries of that city. Enveloped in the homestyle comfort food of Grandparents who cooked seven days a week, this self-taught chef believes that food should be love at first bite and that the act of cooking is an act of gratitude.
Chozen provides a sustainable food system that revolutionizes how we invest in our community without compromising lives.
Zen is currently working towards opening their first location of
Chozen – Vegan Comfort Cuisine –  Food with Intention and Love 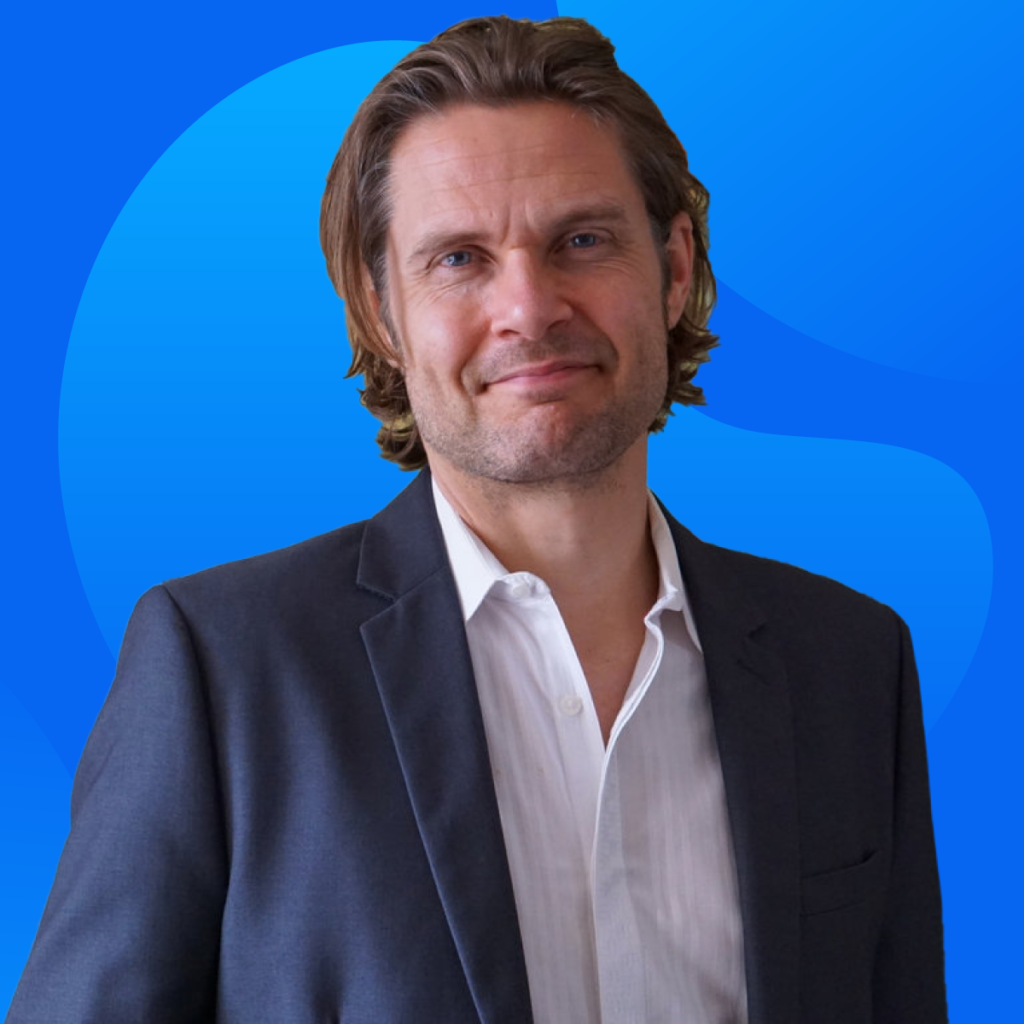 Mikael Roldsgaard Nielsen has been active in animal protection since 2002 and a part of Mercy For Animals since 2006. He spent six years as a volunteer and has served for the past 10 as a staffer in various programs, including corporate engagement, volunteer coordination, veg support, and fundraising. Today he serves as director of leadership giving at Mercy For Animals, where he oversees the leadership-giving program and spends his days working with supporters to ensure they are updated on and engaged with the organization’s work and mission to construct a compassionate food system by reducing suffering and ending exploitation of animals for food. 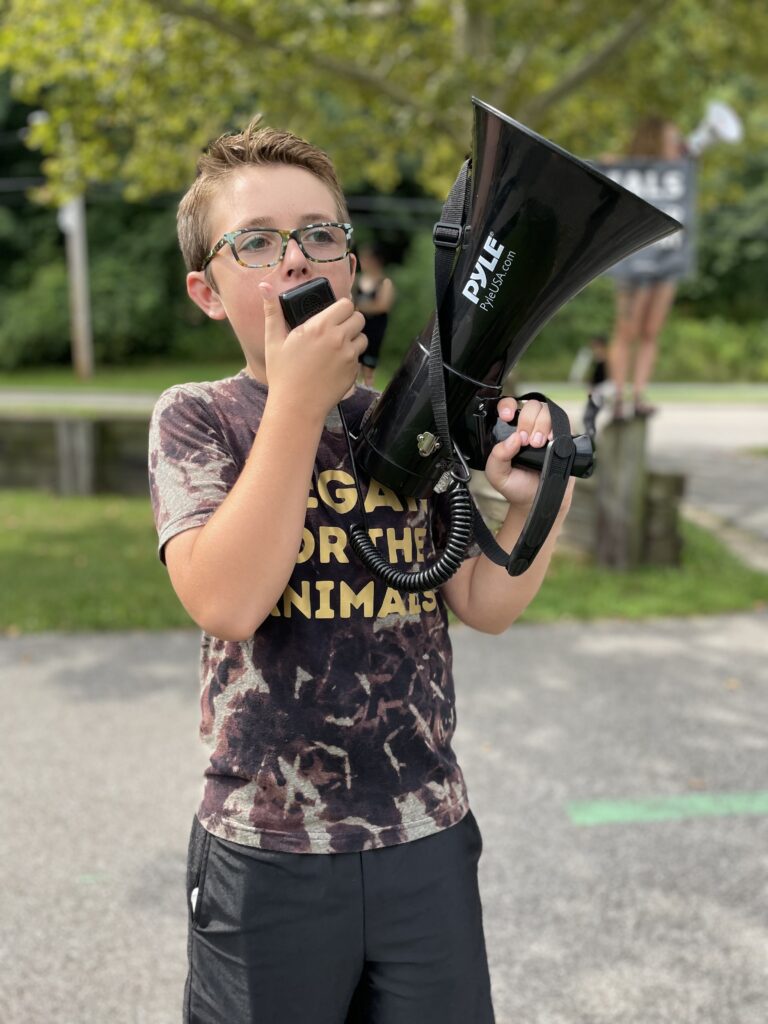 VeganEvan is a passionate and talented young animal advocate committed to creating a healthy, compassionate, and regenerative world. He is the Youth Ambassador for APlantBasedDiet.org and a spokesperson for the Solutionary Species movement. Evan is the World’s Youngest Certified Vegan Lifestyle Coach & Educator.

He has spoken in front of large audiences at several major events throughout the country including the What the Health-Cowspiracy Conference, Central Florida Earth Day, the Animal Liberation Conference, the National Animal Rights Conference, Asheville Vegan  Fest, VegFest Oahu and so many more!!

He has been awarded the Russell Simmons Creative Animal Hero Kids Award, and in 2016, he earned PETA’s Cutest Vegan Kid award.  In 2017, he was awarded the Shining World Leadership Award for Compassion from the Supreme Master Ching Hai Association. VeganEvan is a voice for the animals everywhere he goes! He enjoys leafleting, protesting, doing marches, Open Rescue, Cooking Demos, disruptions, and making videos and rap songs! Evan also participates in Anonymous for the Voiceless Cubes of Truth and Vigils with the Save Movement wherever he travels.

Most of all, he loves visiting all his rescued friends at the sanctuaries where they’re happy, safe & free from harm! 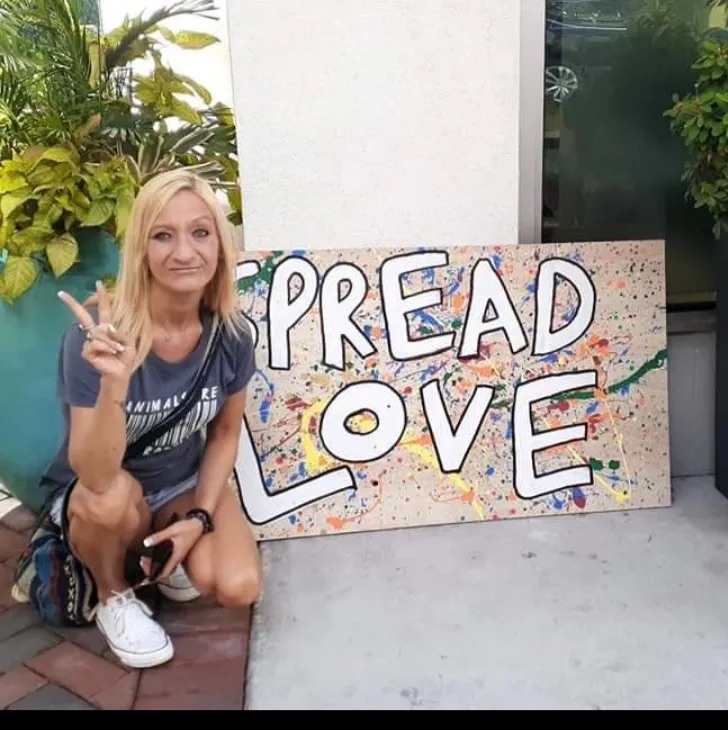 I went vegetarian 11 and 1/2 years ago, and vegan over 8 years ago. My heart is for and with Animals, and I will fight for them with my last breath, and never stop sticking up for injustices. Approximately 7 years ago I decided I wanted to get into animal activism and had no idea how. So I googled some activism groups and I ended up speaking with the headquarters of Direct Action Everywhere in California. They put me in touch with the gentleman that ran the Pinellas County division and the next weekend I went out to my first activism. A disruption at 2 different Publix’s. Since then I have done actions with and for Florida Voices for Animals, PETA, AAM, Million Dollar Vegan, Anonymous for the Voiceless, and numerous activisms on my own. Approximately 6 or 7 years ago, before I really knew anybody in Sarasota that was doing activism let alone vegan, I was commenting on somebody’s Facebook post and in another comment I saw somebody ask, how come nobody does Petland protests anymore? I said I’ll do one… And six or seven years later I am still hosting the Petland protests that went from Sarasota County to Manatee county.
Vegan for the animals!!!💚